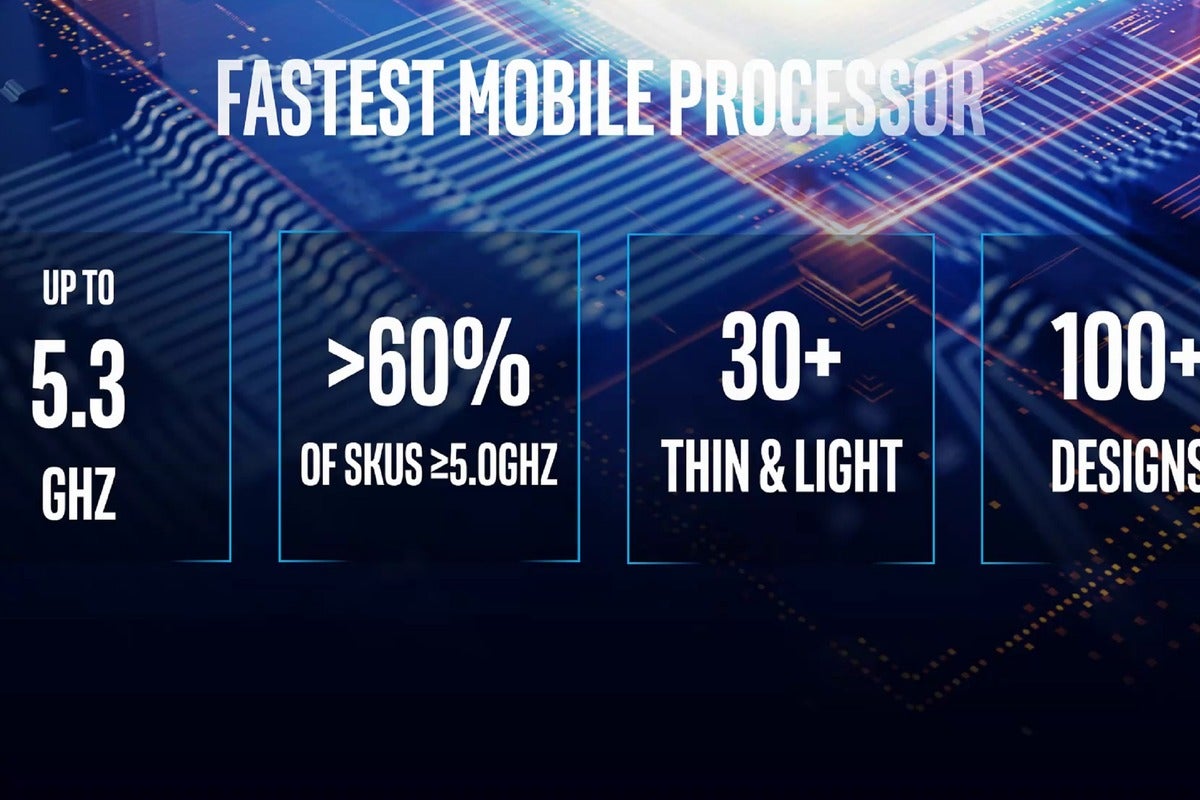 In fact, most of Intel’s six new Comet Lake H-series chips top 5GHz, including a “step up” Core i7 chip, the Core i7-10875H (2.3GHz base, 5.1GHz turbo). Intel’s designed it as a slightly cheaper alternative to the new uber-premium Core i9-10980HK, though both chips include 8 cores and 16 threads. It’s this new Core i9 that sets a high-water mark for clock speed, cresting at a whopping 5.3GHz.

All this potentially sets up a hot debate among mobile gamers: buy in to Intel’s claims that most games still are largely dependent on single threads, where clock speed rules the roost? Or follow AMD, which has made its strongest case in decades that its Ryzen 9 4900HS is simply the highest-performing mobile PC processor on the market?

It sounds like we’ll have a number of points of comparison, as Intel’s promising more than 100 different systems, largely aimed at gamers and content creators, will include the new H-series chips. Pre-orders for those PCs will begin April 2, with systems starting to ship on April 15.

Comet Lake-H isn’t Intel’s first mobile gaming chip, but it’s the first to appear in such a wide swath of laptops, including thin-and-lights. Intel didn’t even make a 9th-gen Core chip for thin-and-light PCs, so the prior Intel Core i9-9980HK and its cousins ended up being stuffed into 4-pound notebooks like the Asus ZenBook Pro, Dell Precision 15, or the Apple MacBook Pro 15.

In contrast, Intel expects more than 30 systems using Comet Lake-H will be thin-and-light designs slimmer than 20mm. Intel executives said that Comet Lake-H will be featured in designs across the consumer, commercial, and workstation markets, which innovations including 300Hz displays and HDR1000 panels.

One question is why Intel built a “Comet Lake-H” chip, rather than design a more powerful version of the well-rounded Ice Lake chip. The idea, according to Frederik Hamberger, Intel’s general manager of premium and gaming laptops, was to design Comet Lake-H specifically for gamers and content creators, each of which typically prefer a discrete GPU. As such, the Comet Lake-H chips do not include integrated graphics. “We think about catering to the end user with a Comet Lake-H focus on frequency and best performance…with a big pipeline to the discrete graphics,” Hamberger said.

Intel has launched six chips in the category, ranging from the Intel Core i5-10300H (2.5GHz base, 4.5GHz turbo) at the low end, all the way up to the Core i9-10980HK at the high end. As Intel’s screenshot above indicates, all of the chips support Optane Memory, an Intel storage innovation that hasn’t quite received the attention Intel would like.

As always, Intel’s processor matrix hides a few quirks. First, only the Core i9-10980HK is truly unlocked; the Core i7-10750H is “partially” unlocked, meaning that it can be pushed upward by four speed bins—probably maxing out at 5.5GHz, though Intel didn’t specify.

Another generational improvement is the memory. While the 9th-gen mobile Core chips used DDR4-2666 memory, the Comet Lake-H series bumps that to DDR4-2933.

So we know how fast these chips are, in terms of clock speed. But exactly how much performance are they expected to deliver?

Recall Intel’s newfound love of real-world benchmarks: great for indicating what sort of performance you’ll expect running real-world applications, but lousy for comparing Intel’s offerings against the competition. PCWorld asked Intel for Cinebench numbers to provide more context, and was politely refused. So we have to use what Intel provided us, in terms of comparisons against its own chips.

Intel’s gen-over-gen gaming tests provide a bit more clarity. Here, the Intel Core i7 is compared against the older 7th-gen Core i7-7700HQ, with significant increases in terms of gaming performance: from 31 percent in World of Tanks to 44 percent in Assassin’s Creed Odyssey.

Intel also compared the Core i9-10980HK to the Core i7-7820HK, generating performance increases of between 23 percent and 54 percent in games, with the most gains coming in Red Dead Redemption 2. However, Intel didn’t manufacture a mobile 7th-gen Core i9, skewing the comparison.

Hamberger said he expects “double-digit” performance improvements up and down the new Comet Lake-H chips over the previous, 9th-gen parts. The exception may be the new “step-up” Core i7-10875H, where Hamberger said Intel expects up to a 20-percent improvement. He called that just an estimate, however; because of the limitations placed on Intel by the coronavirus, Intel hasn’t actually tested the Core i7-10875H yet. “We expect it soon, and we’ll run those system tests as soon as we have it,” Hamberger said.

None of this gets us as close as we’d like for comparing the Core i7-10875H or any of the other new chips against AMD’s Ryzen 9 4900HS. But you can take our tests of the older Core i9-9980HK or similar parts and tack on 10 percent or more to their scores, just for fun.

One aspect that Intel hasn’t said much about is battery life, a critical element in notebooks though less so in gaming models, where they’re almost always plugged in. Hamberger said the best-performing system that Intel has seen in its labs has delivered between 20 and 22 hours of battery life, based on a video rundown test.

One of its more interesting features of the HM470 is the addition of two Thunderbolt 3.0 controllers, each of which supports two ports. That means Comet Lake-H laptops could support up to four Thunderbolt ports, potentially replacing the more generic USB-C ports found in some laptops.

The HM370 chipset is also expected to support Intel’s Wi-Fi 6 (Gig+) wireless technology, which first accompanied Ice Lake. Wi-Fi 6’s chief benefit is what’s known as “Orthogonal Frequency Division Multiple Access,” or OFDM, divvying up the bandwidth to let devices communicate without waiting. “Wi-Fi 6 Gig+” is an optional feature which increases the size of the available channels to 160MHz, allowing a total bandwidth of 1.68Gbps. Laptop makers have the option of using older radios as an alternative to WI-Fi 6, but Intel executives said they doubted that would happen.

With Comet Lake-H closely following Ryzen 4000, we have hot competition and renewed excitement in the gaming laptop market. AMD is now just as potent in mobile as it already is on desktop, where it swaggered in and, depending on the workload, cleaned Intel’s clock. Will it be the same result in laptops? We shouldn’t have to wait long to tell.